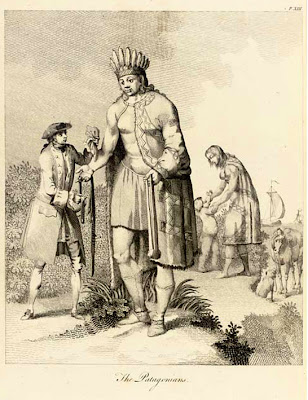 Antoine Joseph Pernety (1716-1801)
The History of a Voyage to the Malouine (or Falkland) Islands, Made in 1763 and 1764, Under the Command of M. de Bougainville, in Order to form a Settlement there: and of Two Voyages to the Streights of Magellan, with an Account of the Patagonians. London: William Goldsmith and David Steel, 1773. 4° (268 x 213mm). 7 maps and charts, 4 folding, and 9 engraved plates, 3 folding. Contemporary English calf, spine gilt in compartments, gilt morocco lettering-piece in one, others decorated with urn tools (splitting on joints, boards a little scuffed and rubbed). Provenance: Halstead Place, Sevenoaks (bookplate with manuscript press-marks on upper pastedown).

SECOND EDITION OF THE ENGLISH TRANSLATION of a primary source on the Falkland Islands by Louis de Bougainville's secretary on the voyage. Bougainville made this voyage at his own expense with the purpose of founding a colony on the Falkland Islands, in part to re-settle the expelled French Canadians (the 'Acadians'), and to secure a strategic position for France near the Straits of Magellan and sea route to the Pacific. As his ships and crew originated from St. Malo, he duly named the islands the Malouines and planted the French flag at Fort St. Louis on the eastern island in 1764. He must have been unaware that Englishman John Strong had made the first landing in 1690 and named Falkland Sound in honor of the First Lord of the Admiralty. Pernety also describes their 1765 voyage, with Guyot's observations of Patagonia and their encounter with John Byron aboard the Dolphin. Byron also had instructions to establish a colony on the Falklands and landed there in 1765 although Spain claimed them as being part of Spanish Patagonia. So began the Falklands controversy. This edition is re-issued from the first English edition sheets of 1771 as printed for Thomas Jeffreys. Overall both English issues are a finer production than the French octavo editions of 1769 and 1760, and include new charts and plans. Hill 1328; Palau 22256; Sabin 6870.
Email ThisBlogThis!Share to TwitterShare to FacebookShare to Pinterest
- -Characters, -Places, -Texts, America