Viking Sunstone Guided Ships
in Cloudy Weather
By John Bohannon, ScienceNOW
To avoid getting lost on their voyages across the North Atlantic 1,000 years ago, Vikings relied on the sun to determine their heading. (This was long before magnetic compasses had been invented.) But cloudy days could have sent their ships dangerously off course, especially during the all-day summer sun at those far-north latitudes. The Norse sagas mention a mysterious “sunstone” used for navigation. Now a team of scientists claims that the sunstones could have been calcite crystals and that Vikings could have used them to get highly accurate compass readings even when the sun was hidden.
The trick for locating the position of the hidden sun is to detect polarization, the orientation of light waves along their path. Even on a cloudy day, the sky still forms a pattern of concentric rings of polarized light with the sun at its center. If you have a crystal that depolarizes light, you can determine the location of the rings around the hidden sun.
Calcite is such a crystal. It has a property called birefringence: Light passing through calcite is split along two paths, forming a double image on the far side. The brightness of the two images relative to each other depends on the polarization of the light. By passing light from the sky through calcite and changing the crystal’s orientation until the projections of the split beams are equally bright, it is theoretically possible to detect the concentric rings of polarization and thus the location of the sun.
Theory is one thing, practice is another. To see if calcite is accurate enough for navigation, a team led by Guy Ropars, a physicist at the University of Rennes 1 in France, built a sunstone. They used a chunk of calcite from Iceland spar, a rock familiar to the Vikings, and locked it into a wooden device that beams light from the sky onto the crystal through a hole and projects the double image onto a surface for comparison. They then used it over the course of a completely overcast day. They took the measurements from a point on land where they knew the sun’s exact trajectory.
If the Vikings were clever enough to use calcite as a sunstone, it would have enabled them to navigate on cloudy days, the researchers report today in the Proceedings of the Royal Society A. Their sunstone came within 1% of the true location of the sun even after it had dipped below the horizon. Ropars cautions that archaeologists have yet to find a sunstone among Viking shipwrecks or settlements.
The study reveals “an ingenious solution to the problem of open-sea navigation,” says John Phillips, a biologist who studies animal navigation at Virginia Polytechnic Institute and State University in Blacksburg, adding that birds may also use polarization to navigate. But even if it is possible, using such a sunstone on a rolling Viking ship at sea would have been a challenge, he says. “Perhaps [they used it] when the Viking sailors encountered islands or ice packs during their travels.”
This story provided by ScienceNOW, the daily online news service of the journal Science. 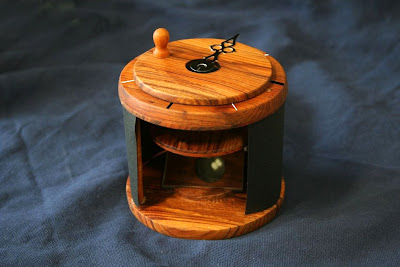 The researchers, lead by Guy Ropars of the University of Rennes in France, build their own Viking sunstone compass from a calcite crystal.
The two beams of light can be seen on the reflective surface inside.
__________________________

Jennifer Welsh
Live Science
Before the invention of the magnetic compass, navigating with a sundial would have been difficult, particularly on overcast days. Ancient Viking lore suggests that they had a magical tool to find the sun, even when the star was hidden.
Researchers have now discovered the crystal that would have made such a magical apparatus possible. The Vikings could have used a common calcite crystal, called an Icelandic spar, to find the sun in the high latitudes where they would have had to battle long twilightsand cloudy skies to navigate. This special "sunstone" could find the direction of the sun even when it was out of view because it plays a trick with the light.
"The Vikings could have discovered this, simply by choosing a transparent crystal and looking through it through a small hole in a screen," study researcher Guy Ropars wrote in an email to LiveScience. "The understanding of the complete mechanism and the knowledge of the polarization of light is not necessary."

To use the crystal, the Vikings would have held the stone up to the center of the sky (from their perspective). When sunlight hits the crystal, that light gets polarized and broken into an "ordinary" and an "extraordinary" beam.
On a clear day, the Vikings would have rotated the crystal until the two beams lined up. Since these two beams line up and have the same brightness at only one angle, by noting where the sun is when this happens the Vikings could establish a reference point that could be used even when the sun wasn't visible.
There are several other types of crystal that have this same property, but they wouldn't have been too useful because they aren't as clear or as common, the researchers said. The Icelandic spar that the researchers analyzed is very common along the coasts of Iceland, and is also common today in Brazil and Mexico.

While none of these Icelandic spar crystals has been found in a Viking settlement, one was recently discovered in an Elizabethan shipwreck from 1592 in the English Channel. The researchers are currently confirming that this crystal could have been used to find the sun when it was out of sight, which they think might be true because a large cannon on board the ship would have interfered with a magnetic compass.
The research is a theoretical confirmation of previous research by another lab suggesting these kinds of crystals could be useful to find the sun. In their laboratory at Rennes, France, they say a prototype sunstone compass they made using calcite works particularly well (even with the naked eye) when the sun is beyond the horizon and even after the stars come out.
Polarized light is also widely used by animals in nature, to create colorful shells and as a way to see the world around them.

The study was published today (Nov. 1) in the journal Proceedings of the Royal Society A: Mathematical Physical & Engineering Sciences.
Email ThisBlogThis!Share to TwitterShare to FacebookShare to Pinterest
- -Curiosity, -Texts